Here you will find your daily English lessons. Watch the video and complete the task set underneath. Make sure you send any work you complete to our Year 5 email year.5@candlebylane.co.uk

Task: Investigate the structure of a Greek Myth

Once you understand the structural sections of a myth, make notes to identify the key events within each part of the myth. For example, what happens in the introduction? Think about who is involved, what key events take place and where they take place.

Send us your boxing up to our Year 5 email!

Task: Watch and listen to the story of Medusa. Can you retell the story in your own way?

Watch the video of the story of Medusa and listen to Mr Durrant reading the story to understand the Greek myth: Perseus and Medusa. We want you to retell this story in the most creative way you can. If you're stuck for ideas, we have got a few suggestions below;

Mr Durrant reads the story of Perseus' quest to slay the monstrous Medusa. Can you retell the story in your own way?

Send you fantastic creation to our Year 5 email so we can see what you've made! If they really wow us, you might even received a golden postcard in the post!

Task: Compare the structures of two different myths by identifying the similarities and differences.

Mr Durrant goes through the process of boxing up Perseus and Medusa to aid you in identifying similarities and differences between this text and our earlier ...

Send us your comparisons between the two myths to our Year 5 email.

If you want an extra challenge, see if you can add in the second dilemma and resolution to your boxing up - where would it go? 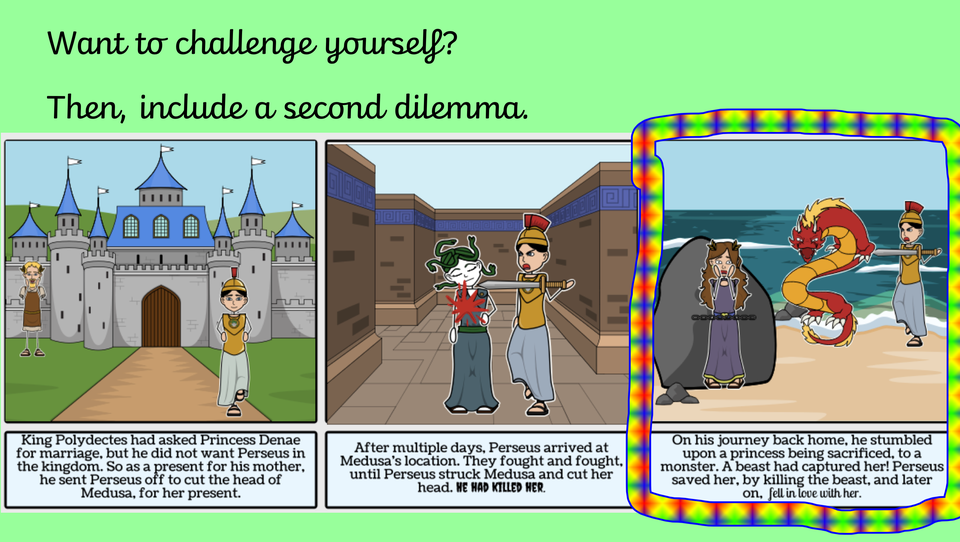 Task: Restructure the clauses in the sentences and comment on the impact each different sentence has on the reader.

Watch the video to recap the different sentence structures and terminology to use. See how you can reorder the clauses in some sentences to give a greater impact on the reader. Then there are some questions in the document below to investigate the different ways sentences could be arranged.

Send us some of your thoughts on the different sentence orders to our Year 5 email.

If you want an extra challenge, see if you can write a paragraph describing the moment when Perseus entered the mouth of the Gorgon's cave. Use a variety of sentence structures in your writing and think carefully about the order of your clauses to create the most impact on the reader.

Watch the video with Mrs Tate and refresh your memory on the rules for direct speech. Turn the speech bubbles on the comic strip into sentences with direct speech that use the correct punctuation. Think carefully about the punctuation you need to use, who said it, how they said it (what speech verb will you use?) and what were they doing while they were speaking (add an adverbial phrase).

Send us your speech sentences to our Year 5 email address!

If you want an extra challenge, see if you can create your own conversation between two characters and punctuate their speech correctly.